Play the latest WebGL build on Poki (supported by ads)

Despite the game jam being over (and Irrational Karate placing 1st - wooh!), my work on this game is not. Having teamed up with the talented guys at Bitgem, we're looking to continue development and expand the content, clean up any remaining rough edges, and release on more platforms. I'll keep the dev log posted with updates as they happen and will upload new builds as and when sensible milestones are reached.

Irrational Karate is currently free on itch (genuinely free - no ads, and please feel free to share it with people), but any donations are incredibly welcome as they'll directly help fund further development on this and other current and future projects.

P.S. Oh, and the web version should be fine, but I'd definitely recommend the download version for quality/stability etc.

Its honestly an amazing game, but the only problem is kick  is the best move in the game. If you kick and walk forward its an infinite and goes until you beat the game in the corner. Other than that, very enjoyable game overrall! 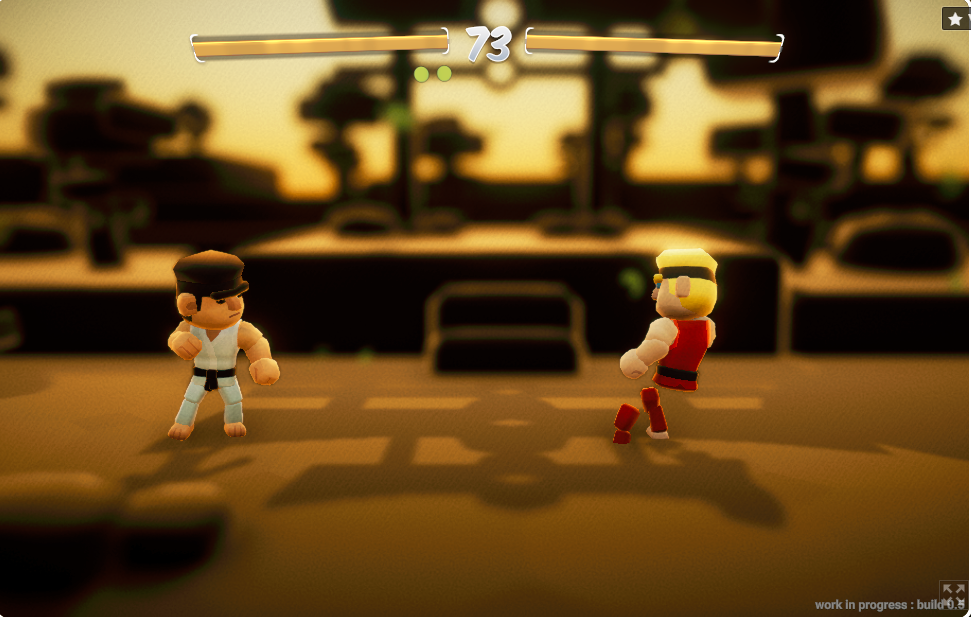 Haha, well that isn't meant to happen! I believe I've managed to fix that in the current development build. Until then, try not to hit the poor guy so hard! :P Thanks for reporting it! :)

Absolutely love the style and the somewhat looseness to movement actually feels complimentary to the game's fun experience. I really enjoyed it! Thank you for sharing!

Thank you! :) I'm glad you think so - I really am just aiming for a more casual and accessible take on the fighting genre, and it sounds like that's what you got from it, which is excellent. Cheers for the kind words.

Reply
Raithias4 years ago
It is what it says it is a cute fighting  game pretty much anyone can enjoy. It's fun to beat the crap out of the AI i'm sure equally fun if you grab a buddy and, go at it. Makes a great button masher yes i'm looking at a lot of you!
Reply
Iconoclast2094 years ago

Awesome job!  I love it.

this game is awesome! love the fast paced action! would love to see more from this game! good job on creating this! :D

Haha, that's awesome! Really glad you liked it and it's so good to watch someone having fun playing it. The fact you thought the AI might've been a real human player is a good sign too. I do intend to do more with this so hopefully you'll like the direction it continues in. Thanks again!

Awesome to hear :D i look forward to it! :D

We had a lot of fun and laughs with it.

Here is a a short video.

Thanks for sharing and taking the time to put together a video - really appreciated, and super happy that you like it so far. :)

Hello! I had great fun playing your game, i though the graphics were excellent and the game itself really playable and quite addictive. I'd love to see more. I hope you don't mind but i included your game in my video this week. Thanks again!

Thanks so much for taking the time to include this in your video as well as for letting me know about it. I'm really glad to hear you enjoyed it.

The version in your video isn't the latest and there are a bunch of improvements since that build including reworked AI, more responsive controls, persisted win/loss stats, and a bunch of minor big fixes. One thing you highlighted was around wanting scraps to last longer before the opponent was floored and that is now the case. The damage calculations have been changed significantly for balancing (along with the speed of some attacks) and only a sufficiently damaging attack will floor the opponent now.

I'm on a short break from this to catch up on some other things after the crazy push for the game jam but I'll be back to adding more features and content soon!

Hello, thanks for the message. Yeah it was one of my concerns when i put the video together, i think it had been 2 weeks since i had recorded playing your game and i know alot changes in a day, let alone a couple of weeks. So I apologise if i have shown it in a light you don't like. I do intend to revisit some games that have been updated and sounds like I should do that with Irrational Karate, the changes sound great. Thanks again!v

Not at all! As you mentioned, things change so quickly, and I'm incredibly happy that you liked the game, even in the earlier state, enough to share it. I only mentioned the changes, partly so you were aware in case you wanted to give it another look, but also to point out that the constructive criticism was very welcome and that I do respond to it and make changes based on it. :)

i hope you dont mind! i will be streaming your game on my youtube channel and my site will be writing an article about the game aswell. we have a developer spotlight so people can see new and upcoming games that are under the raider. so far im really digging this game. i want more people to know about it. ill include a link to this page so more people can grab the demo

Thanks! I am looking to expand on it and add more variety but I also want to make sure it remains easy to get into without having to learn loads of controls and combos - difficult balance! I'll keep giving it some thought and experiment a bit.

wow this is AWESOME

Thank you - very much appreciated. :)

Nice game, I love the art style and the ragdoll!

The only complaint I have is that some of the moves (kick) needs to have a cool down of some sort since anyone can just spam it to win.

Otherwise I'd love to see how this game turns out after some updates :)

Thanks! I'm really glad you like it and the feedback is appreciated.

I did have concerns about exactly that which I tried to address with changes to the speed of the attack/transition and lowered damage of the quicker attacks. I'll have to give it some more thought. The cooldown may be The best option but I wanted to avoid taking away or adding delays to The response to player input.

The kick can be jumped over and the punch can be ducked under (and you can attack from either position) and good timing can get you in between attacks even on the ground, so this may be more of an issue against the current AI as it is OK but not that intelligent about dealing with the player spamming a button yet. If you have a chance to try out local multiplayer, I wonder if you find this problem is reduced?

Great Job! The game really reminds me of Ragdoll Kung Fu on PS3!

Lots of fun and fun to play!

Haha, I'd completely forgotten about that game - had a lot of fun with it back in the day. Thank you! I'm really glad you enjoyed it. :)

Well done ! Very enjoyable experience. Did you plan to get this any further ? If yes, in which kind of direction ?

Thanks so much - I'm really glad you enjoyed it!

Yes, I absolutely do plan to. I didn't at the start of the jam, particularly with this being my first venture into beat-em-ups, but I've fallen in love with the project a bit along the way.

I intend to always keep this more simple and accessible than hardcore fighting games so that people like me can easily pick them up and have fun. For that reason, I'm not keen to venture into overly complex combos etc. However, I'd still like to include the concept of special moves. My initial thoughts on this would be that they are something that take time/good play to recharge and are easy to activate so that the skill would be in picking the right time to use them.

Additionally,  I'd like to add more arenas and start to include destructible/interactable objects. Partly for extra "color" and partly to provide the additional gameplay challenges of avoiding a trap or luring/pushing your opponent into one.

Another thing I would like to get in would be some simple progression so that in singleplayer there is something more to aim for. Even if it does just end up being moving up through the various belts then it is just some added motivation.

For a bit more variation, another goal I have is to add weapons and/or alternate move sets. I don't want these to add complexity to the controls but they may just help to keep things fresh and could also tie into progression - unlocking new weapons/move sets along the way.

Finally, I've been considering additional game modes. If nothing else, a tutorial level would be good, but I'd like to do some more things like perhaps challenges around destroying targets in the quickest time or event a football mode. I'd need more thought as to the options to pursue but, again, it could just help with variety.

Local multiplayer is my own preference, but online multiplayer could also be a future target...

Thanks for the response. I love your simple and accessible approach, keep it this way ! Can't wait to see the project evolving, I will keep one eye on it.

Well that's absolute made my day! Thanks! :D

So I really love the visual style but the fact that nearly every hit sends the other character flying and they bow to each other every time it makes for a really awkwardly paced fight. Spam attack, catch some air, land, bow, repeat.

Cheers for the feedback! I'm inclined to agree and was considering some changes to how easy it is to knock each other down (currently any head contact is guaranteed to). It's been tricky enough getting the game together in about a week and balancing it is going to take longer than the game jam deadline, but I intend to see it through even if that goes beyond the deadline, so all suggestions are very welcome. Thanks again! :) 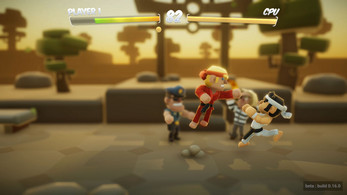 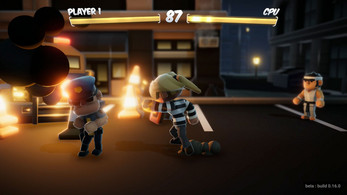 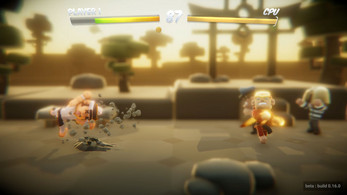 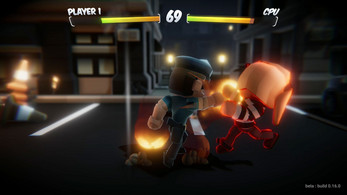